I was so honored to have an article written about my equine art and to be chosen for the cover of Horses in Art Magazine. To read the full article, please go to my “About” page and “Press” below that.

Thank you Horses in Art!!! 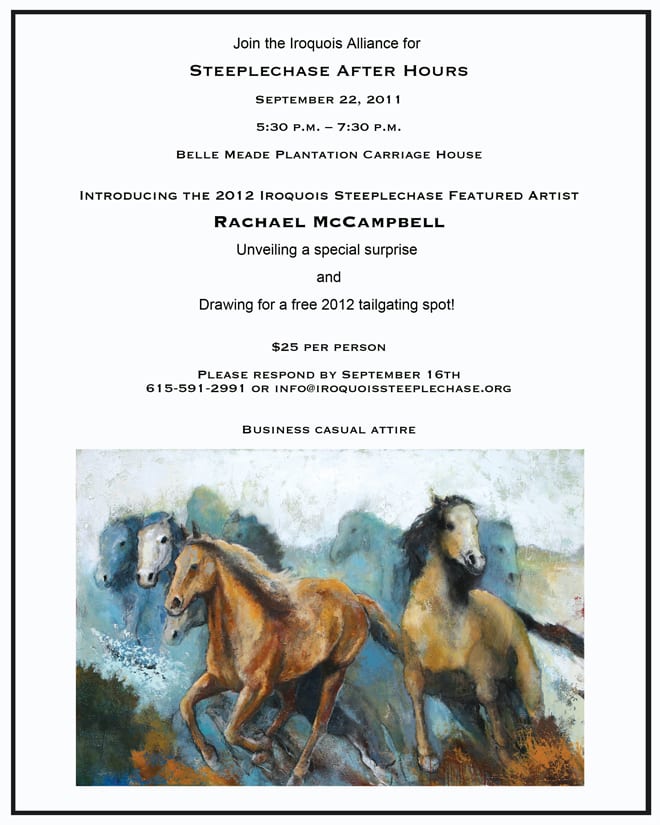 Please join us for the Steeplechase After Hours event on Thursday September 22, 2011 at the Belle Meade Plantation Carriage House in Nashville, TN.

The Iroquois Steeplechase Organization is serving light Hors d’Oeuvres and cocktails from 5:30 – 7:30. Cost is $25 per person.

New equine art by Rachael McCampbell will be part of this event.

“Women in Mythology: The Power of the Feminine in Ancient Tales” is on view at the Parthenon Museum in Nashville, Tennessee from July 17th through November 30, 2010.

Fine artist Rachael McCampbell’s large scale paintings illustrate some of the poignant moments in Greek myths when women made powerful decisions that would change their fate. “What better venue to exhibit a show about Greek goddesses than in the Parthenon — the temple to Athena?” McCampbell asks. “I was thrilled when Susan Shockley, the curator, suggested the show to me.”

The opening night, July 23rd, was a festive affair which brought in a record number for the Parthenon at 400 guests. Anne Christeson, the academic advisor to the show, and Latin and French teacher at Montgomery Bell Academy, gave an awe-inspiring speech about women’s roles in Greek myths and how the themes of a mother’s love, sexual love and the power of feminine beauty are timeless and affect us today.

END_OF_DOCUMENT_TOKEN_TO_BE_REPLACED

Rachael McCampbell is partnering with Tinney Contemporary and The Land Trust for Tennessee for an inspiring and insightful exhibit entitled: Endangered Heritage: Nature in the Balance.

A native Tennessean, McCampbell recently returned from Los Angeles to Nashville (Leiper’s Fork) to be near the source of her inspiration—Nature. This connection is strongly evident in her body of large-scale, highly textured paintings of North American endangered species, such as the Whooping Crane, Red Wolf, Florida Cougar, Big Horned Sheep, Stellar Sea Lion, Ivory-Billed Woodpecker and the Nashville Crayfish, among others. A central element of the show, designed to further challenge the viewer, is a sculptural monument comprised of actual bird and animal parts—a memorial to extinct species that have been eliminated primarily due to habitat encroachment. The painterly representations of endangered species surrounding the monument act as a hopeful contrast to the macabre sculpture as they uplift and inspire the viewer to action, shining a spotlight on the urgency surrounding our quickly disappearing natural endowment.