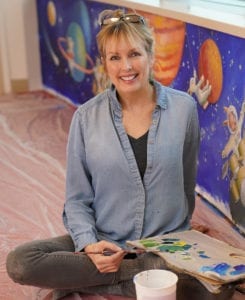 I created a very large painting called “Space Bunnies” for Vanderbilt Children’s Hospital that was installed in late February 2020 –right before Covid hit Tennessee. This painting was so large, I had to paint it on the side of my house so I could stand back and draw the composition and paint it. It wasn’t easy, but it was all worth it once I got the painting installed at Vanderbilt. It really brightened that area on the 11th floor and the additional red bunny sculptures added that extra punch. I hope that the kids are enjoying it and that my art is bringing some smiles to worried families with sick children. Here’s an article written about it in the GCA News.

At Monroe Carell Jr. Children’s Hospital at Vanderbilt, bunnies in space helmets swirl around the rings of Saturn. A bunny speeds by the sun in a spaceship. Another rides across the sky in a hot air balloon.

“Space Bunnies” is a 22-foot by 30-inch canvas mural that adorns a wall on the new 11th floor of Children’s Hospital, which is open now. The newest floor is part of a four-floor expansion, atop the existing hospital, that began in 2016 and is supported by the Growing to New Heights Campaign.

Rachael McCampbell, a lifelong artist who lives in Franklin, Tennessee, spent several months working on the Space Bunnies mural, carrying the theme through from art she created for another pediatric facility. She was commissioned to create the piece for Children’s Hospital at the request of an anonymous donor who has admired her art.

The colorful canvas mural, created with acrylic paints, along with four sculptures of bunnies, complement the space theme in areas of the newest hospital floor, which includes the Neonatal Intensive Care Unit as well as cardiology and transplant care.

As McCampbell painted each part, she kept patients, families and staff in her thoughts.

“I hope it’s something that can divert them from their worries and ease their heavy hearts,” McCampbell said. “Sick children break my heart. I know there are siblings and parents, as well as staff, who may come by, pause for a second and perhaps think ‘how funny, how whimsical.’

“All the planets are there, from Earth onward, so if they want to name the planets or imagine swinging from a star, or skating around the rings of Saturn, hopefully this respite will help take their minds off of things for a moment. If that happens, then I feel my job is done.”

Art like McCampbell’s has always been an important part of Children’s Hospital because of the therapeutic value. From the statue of the frog playing a violin, known as “Lite Lunch,” to the Cat in the Hat statue to every piece of art hanging in patient rooms, the art is adored, visited and frequently photographed by patients and families.

There are at least 150 original art pieces in Children’s Hospital, plus each of the hospital’s 343 patient rooms and floors have print pieces, said Jenny Lewis, associate program manager for Vanderbilt University Medical Center Arts. She is responsible for curating and keeping track of the roughly 2,500 pieces, including McCampbell’s mural, across VUMC and Children’s Hospital.

“Art is an integral part of Monroe Carell Jr. Children’s Hospital at Vanderbilt. Creating a soothing and magical environment helps families and children feel comfortable and heal at a faster rate,” Lewis said.

“A handful of the public art pieces are collaborations between local artists and children from all the area schools. It’s such a positive impact for children to create pieces to help other children and even see their own pieces when they come to doctors’ visits.”