There are many hurting hearts and souls in a hospital setting, especially when it involves sick children. I was so blessed, in 2020, to be chosen to work on another piece for East Tennessee Children’s Hospital in Knoxville, TN, creating a painting that would be fitting for their beautiful new chapel.

When a person seeks out a chapel, it usually means that they are retreating to a quiet spot to pray, contemplate or feel peace. Being very cognizant of this, I wanted to focus on creating a piece of art that is soothing to people of all sexes, ages, heritages and religions. I wanted my art to touch the hearts of ALL people, but how?

I thought about this for a long time. The idea I kept returning to again and again is that I needed a neutral image. It was first suggested by the committee that I consider using symbols of all religions in the art, but that idea seemed problematic. What if I used a symbol that was perceived as larger than other symbols?  Someone would take offense. What if I used a symbol for a religion or denomination that was not agreed upon by other members of that same organization. I just felt like there were too many “if’s.” I then asked myself, “What is a common image or factor to all religions that I feel comfortable creating?” Then it came to me.

Nature, in my opinion, has always been the Switzerland of imagery. It’s hard to offend or hurt someone with a traditional landscape and in most cases acts as a catalyst to inspire the viewer. But this needed to be a spiritual and inspiring landscape. It couldn’t be a traditional oil since this was a commission for a children’s hospital. It needed to fit in to its environment using bright colors.

Sometimes the medium you use to paint with dictates the art itself. And in this case, I knew that Alcohol Inks could be the perfect medium as the dyes are bright, colorful and would give an amazing glowing effect. But there was one drawback, they are fugitive. That is, the colors are not proven to be steadfast. It’s a fairly new medium and hasn’t been tested a great deal but reds and other colors are known to fade.

I had also decided that the way to make this more interesting was to put the art on a light box with a dimmer switch so that it would glow in the chapel, imitating the concept of a stained glass window in a church. I painted the alcohol inks onto Yupo paper which is gorgeous! Yupo is a plastic paper that takes the dyes and because it’s a brilliant white, it brightens the painting up and when it’s backlit making it glow. BUT, since the dyes are fugitive, I couldn’t do that. 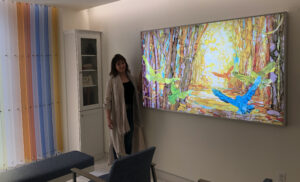 So, I came up with the idea to scan my artwork and print it onto film so I could enlarge

the size of the piece to fit the chapel space, and if it fades over time, the hospital can reprint it. Since the art was going to be a digital piece, that meant I could add things to the landscape. So, I proposed to the committee that I add birds flying toward the sun that’s shining through the trees. This not only would help by leading one’s eye to the focal point, but it had spiritual connotations that I felt anyone could relate to. The sunlight could be God, Peace, Comfort or whatever you feel it is. However one sees it, I think the painting exudes hope–something we all need more of.

I delivered the painting during the covid pandemic in July 2021. We got it up without a hitch and it’s there now in the Hobson Wood Foundation Chapel at East Tennessee Children’s Hospital. “Forest Glow” is a backlit piece originally painted with Ranger Alcohol Inks on Yupo paper, then digitally transferred to translucent film. The original (without the birds) hangs in the offices of the hospital where it’s not in the light and will hopefully last a very long time. Thank you Carlton Long and East TN Children’s Hospital!

Here’s a video of the installation: